74% of divorcing couples now fail to finalise their financial split and risk future financial claims from the exes, in a trend driven by DIY divorces.

Wilsons says of the 109,000 divorces that took place in 2016/17, just 26% reached a final financial agreement accepted by the family court, through a ‘consent order’. The number has fallen substantially from 39% just five years ago.

Drafted by a solicitor, a ‘consent order’ renders any financial agreements made by the couple – regarding money, property, savings, investments and / or maintenance payments – legally binding.

Without a ‘consent order’, however, financial agreements can be revisited years – or even decades – after a divorce has taken place. This can be devastating for the financially stronger party – especially if they have moved on and met someone new or even remarried.

The husband, however, went on to become a multi-millionaire entrepreneur – prompting his ex-wife to claim money for a house and life-long maintenance. The case was taken to the Supreme Court where the ex-wife received £300,000 from her former husband – despite the fact that they had been divorced for two decades and the fact that he had since remarried.

Jacqueline Fitzgerald, Partner at Wilsons, says: “Splitting your assets informally might seem like an attractive option, but it opens you up to huge risk if your ex decides they want more money decades later.”

“Whilst divorcing couples may seek to reach an agreement outside court through a cheap DIY divorce, it is vital that they then ensure this becomes legally binding. Failure to do so is incredibly risky.”

“It is possible that resentment or future disagreements lead a relationship to sour – at which point one or both parties can revisit financial agreements that were not made official.”

“This can be extremely upsetting – especially if one or both parties have moved on and have built a new life.” 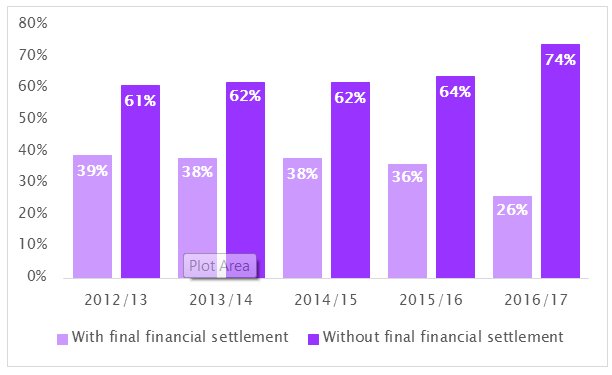