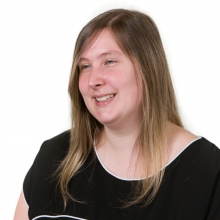 In her spare time Sam enjoys going to the cinema, socialising with friends and watching her local rugby team.