A record-breaking £5.1bn has been collected by HMRC through Inheritance Tax (IHT) receipts in the last year*, says Wilsons, a leading private client law firm.

The figures out today show that IHT take has risen by 9% on the previous year when £4.7bn was collected over the same period.

The steadily growing value of residential property coupled with the freeze on the IHT threshold at £325,000 means more and more estates are being hit by the tax.

Wilsons says that, at 40%, IHT is one of the UK’s more punitive taxes.

Wilsons says that it is vital that individuals seek out advice to help them plan how their wealth is transferred to their children in a tax-efficient manner – and that they start this process as early as possible.

It says that failure to do this makes it more likely that they will leave their dependents with substantial IHT bills.

Steps that can be taken include:

Tim Fullerlove, Partner at Wilsons, says: “A substantial amount of wealth is now being taken by the government through IHT. What upsets people is that this is wealth that is being taxed twice.”

“It is important that people start planning as early as possible how they mean to pass their wealth on to their children or grandchildren. If they do not do this, families could be met with large IHT bills.”

“There are a number of steps than can help transfer wealth gradually, tax-free – ultimately reducing IHT considerably.” 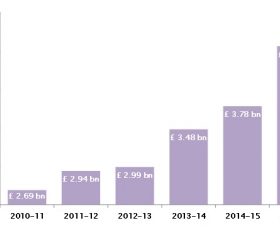 HMRC Inheritance Tax take jumps 21% to a record-high £4.6 billion in a single year