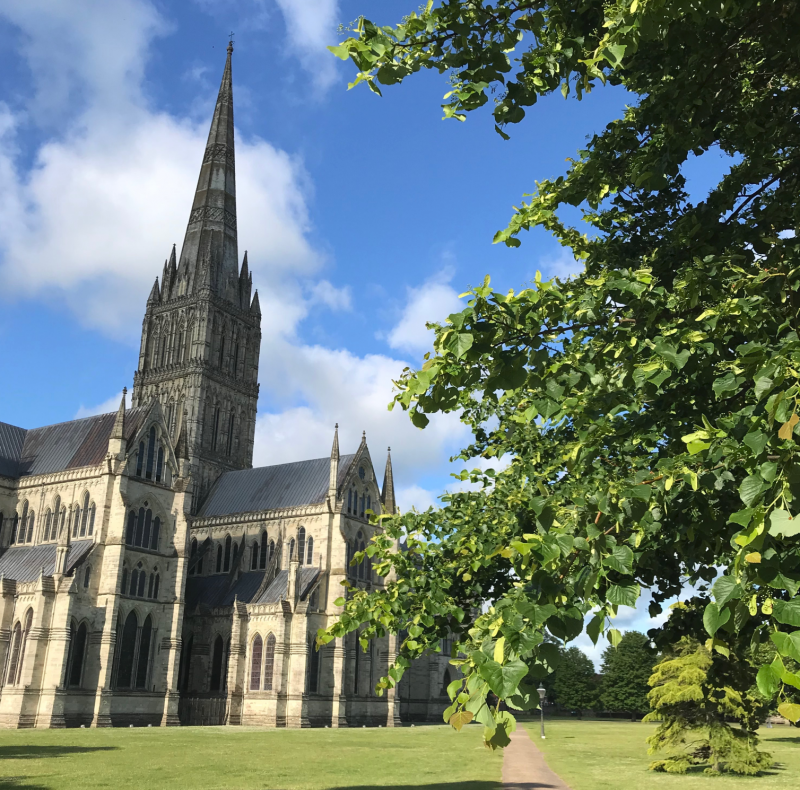 The city of Salisbury is playing host to Armed Forces Day on 29 June bringing with it celebrations, civic pride, and maybe even the odd Royal or two - #salisburysalutes!

When the news that Salisbury was to host Armed Forces Day in June 2019 was announced, it brought with it cheer, pride and a sense of celebration – just when the region needed it most.  It was July 018, and just months after the city was still reeling from the shocks of the novichok incidents.  It was also a time when the military showed their mettle, strength and worth to an ordinary community going through an extraordinary time – every day members of the Armed Forces were seen on the streets of Salisbury helping to protect people, decontaminate the affected areas and allay fears.

However with so many connections to the military on a local level, including several Army basis, Bulford Camp, Tidworth Camp and Salisbury Plain, one of the UK’s biggest military training centres, this is also a celebration of what makes up this region of South Wiltshire,.  As the former Defence Secretary, Gavin Williamson, said at the time: “Salisbury was a natural choice to host Armed Forces Day in 2019.  The city has a historic link with our Armed Forces and our troops demonstrated once again their bravery, dedication and skill during the central role they played following the reckless nerve agent attack here.

Our extraordinary service men and women continue to help Salisbury and the people of this beautiful cathedral city through the clear up and investigation, and it is extremely fitting that next year the city and the entire nation will be able to thank them here for their commitment and unwavering service to protecting our nation from the deadliest of threats.”

Now in its 11th year, and formerly known as Veterans’ Day, Armed Forces Day is a national event delivery the change for communities to show support for the tem and women who make up the Armed Forces, from current serving troops to service families, veterans and cadets.  And with everything from parades, barbecues and live music to parties, tea-dances and fly pasts, it provides a much-valued morale boost for he troops and their families, and also feels like a celebration of the people who make up the region.

As Salisbury becomes the backdrop for the sight of sailors, soldiers and airmen and women marching through the historic stress, city leaders also hope  the day will be a showcase for troopers relocating to the area from Germany.  Roughly 4,50 British troops will move from Germany to Wiltshire this summer.  Over 900 new homes are being built in the area; the town of Ludgershall will house 242 soldiers and their families, Bulford will house 225 families and 450 will be based in Larkhill.  The project has a budget of £246million and has been ongoing for over a year.  Infrastructure is also being built to cope with the scale of the arrival – new schools and GP surgeries are planned.

SSAFA, the Armed Forces charity, has been announced as the official main charity sponsor and the Royal British Legion is a charity partner for the Armed Forces Day.  Baroness Scott of Bybrook, OBE, Leader of Wiltshire Council explains: “The charity does such valuable work supporting serving military personnel, veterans and military families.  We are proud SSAFA is joining us in this key sponsorship role as we celebrate and say thank you to our Armed Forces for the vital role they perform in protecting us and our country.”

Sir Andrew Gregory, chief executive of SSAFA, adds: “The provision of emotional, practical and financial assistance during times of needs is at the heart of SSAFA.  We call on society to join us in showing our gratitude to the men and women who make up the Armed Forces”.  General Dynamics, Landmarc, MiPermit and Nationwide Engineering are also supporting the event as gold sponsors.  Platinum sponsors are KBR Aspire Defence and Lovell.

On Friday, Hudson’s Field showground will also be open to the public but military personnel will be the main focus, with Friday themed as a thank you to serving military personnel with a free afternoon BBQ for them and their families.  This will be followed by a concert that is free to attend, but tickets must be booked online first.

There are other smaller events happening across he UK but Salisbury is hosting the national event.

Saturday is the main day and this is themed as the community day, with members of the Royal Family and the Government anticipated to attend.  It begins with the parade in the city centre in the morning followed by a huge programme of entertainment including military demonstrations at the showground at Hudson’s Field from 12 noon, culminating in an event concert and fireworks display.  It is expected these spectacles will be enjoyed by thousands of people.

Sunday focuses on veterans and young people – those who have served and those who may serve – with a commemoration and drumhead service, supported by the Royal British Legion, with the Bishop of Salisbury and padres leading the service.  There will be a veterans’ parade, a commemoration service and an attempt to set a world record for the human poppy in the main arena with more than 4,000 people.

Also look out for the SSAFA Armed Forces Day Hike, which finishes at Hudson’s Field in Salisbury and is an opportunity to show support for the Armed Forces family.  With a range of options available there is something for everyone, from a family-friendly seven-mile route, a 13.1 half-marathon distance, to the ultimate challenge, the 26.2 mile marathon distance route.  The hike will help raise funds for SSAFA to support more than 70,000 people who go to the charity for help each year.

Local bands, acts and performers were given the chance to compete to perform for Armed Forces Day with the Shine for Salisbury competition.  Members of the public voted through a Facebook page for their favourite three acts, out of 17 finalists.  The winners, Duck n Cuvver, The Treblemakers and Salisbury Rock Choir, will each be performing on one of the days at Hudson’s Field.  Duck n Cuvver is made up of Ian Lawes, Robert Hardie and Andy Reynolds.

Ian taught himself to play guitar, starting at the age of 15.  He taught his son-in-law Robert to play around seven years ago and they have been performing as Duck n Cuvver for just under five years.  They are both former soldiers – Ian served with the Light Infantry in the 1970s, including tours of Northern Ireland, while Robert saw action in both Bosnia and Iraq.  They have recently been joined by Andy Reynolds.  The band plays a mixture of classic hits and their own original material.  They have performed many times in support of charities including cystic fibrosis, the Royal British Legion and SSAFA.

The Treblemakers have been together for four years and are made up of Ysanne and Kenny Duke on vocals, John Fennelly on guitar, Tim Clissold on drums and bass player Trevor Hannant.  They are a local covers band from Salisbury and Amesbury playing classic floor fillers from the 1960s to the present day.

The third of the winners is Salisbury Rock Choir who are more than 90 men and women who love singing everything from pop and rock to Motown and ballads.  Choir leader, Charlotte Mutch-Jones, says “The Salisbury Rock Choir is over the moon to be performing at this year’s Armed Forces Day National Event, and are so proud to be hosting it in our home town.  Get ready for us to sing our hearts out””

Salisbury’s MP John Glen: “We received a huge boost when it was announced that our city was chosen to host this year’s Armed Forces Day.  It will be a significant fillip for the city.”

Baroness Scott of Bybrook OBE, leader of Wiltshire Council: “Thousands of people will join us here in Salisbury as we recognise and celebrate our Armed Forces and the vital role they perform in protecting us and our country, as well as honouring those who have served, our veterans.  Wiltshire, I believe, is the home of the British Army.”

Colonel Andrew Dawes, Commander South West: “Salisbury has many historic and current links to the military, so it is a great honour for us to support Wiltshire Council to bring Armed Forces Day to the city.  It promises to be an impressive celebration, not just for Salisbury, but for the whole of the South West and the rest of the UK.”

Pauline Church, Wiltshire Council cabinet member for economy and South Wiltshire recovery: “We are delighted the city has bene chosen to host National Armed Forces Day.  This nationally acclaimed event is expected to attract 250,000 visitors over the three-day programme of events.  It will recognise and celebrate our Armed Forces and the support provided this year to Salisbury and Amesbury to get them back to normal.”

Andrew Lord, Chief Executive of the homeless charity Alabaré based in Salisbury: “National Armed Forces Day 2019 will be held with great pride in Salisbury.  It will be a fantastic occasion in a historic ad resilient military city.  At Alabaré we are glad to support our Armed Forces veterans in their time of need, and help them back to new stronger, healthy and resilient lives.  We work closely with SSAFA, the RBL, ABF The Soldiers Charity and many other organisations to help veterans into support as quickly as possible.”

Follow our #salisburysalutes campaign for ongoing information during the two week period,