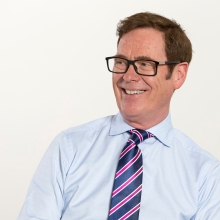 Rob is responsible for the day to day running of the firm, working closely with the Managing Partner and the firm's Management Board. He joined Wilsons in 1973 following a brief period working for the Midland Bank. He joined the Accounts department with the specific aim of taking over as head cashier on the retirement of the then current incumbent. As the firm developed through the 1980s and 1990s, Rob became responsible for a growing Accounts team necessary to support the business. In 1982 he also assumed the role of Practice Manager, responsible for all aspects of administration within the firm.  In 1990 Rob became Director of Finance, and after a brief turn in the London accountancy world in 2000,  he was appointed Wilsons' Director of Operations in 2006.

Rob encourages working relationships throughout the firm and is keen to assist in helping individuals and teams achieve their potential.

Rob is a keen musician (when time permits) and enjoys musical theatre.  He also enjoys travel and whilst his children are now grown up, caring for his wife and two daughters still appears high on his list of priorities.