National minimum wage (NMW) legislation requires an employer to pay its workers minimum rates of pay for all hours that are deemed to be working time, which for adults aged 25 years and over is currently £7.50 per hour. If it fails to do so, it is potentially liable in addition to the shortfall itself, for a financial penalty of up to 200% of the total underpayment (subject to a maximum of £20,000 per affected employee), plus public naming and shaming and ultimately, criminal prosecution.

NMW compliance is assessed by reference to average hourly pay, calculated by taking the total gross pay of a worker in any 'pay reference period' (a week for weekly paid workers, a month for monthly paid workers etc.), and dividing it by the number of hours the worker spent 'working' during that same period. There are various rules as to what is and isn't to be included in both the pay and working hours parts of the calculation.

One area that has caused particular difficulty in the social care sector, is the question of whether the hours care workers spend on standby during sleep-in shifts are to be treated as 'working' and therefore included in the NMW calculation. Government guidance on the issue has been unclear and, as a result, there continue to be many cases reaching the Employment Appeal Tribunal (EAT).

In the recent decision involving Mencap, the EAT decided having looked at a number of factors, that sleep-in care workers for vulnerable adults who were provided with sleeping facilities and were not required to undertake any specific tasks other than to remain on site for their 9 hour shift in order to be available to deal with any incidents that arose, were to be treated as performing 'work' for the duration of that shift. As a result, Mencap was in breach of its NMW obligations for only paying a flat-rate shift payment and an hour's pay, which together did not equate to the NMW for the 9 hours 'worked'. Mencap has appealed this decision to the Court of Appeal, which is due to be heard in March 2018.

Many care workers are not paid the NMW if the duration of their sleep-in shifts were to be taken into account when calculating their average hourly rate of pay, such that the potential liability for arrears of pay, let alone the additional financial penalties for non-compliance, would be crippling for many care providers and charities. As a result, the Government announced in the summer of 2017, that it would remove the financial penalties and public naming of offending social care employers in respect of NMW arrears prior to 26 July 2017. Recognising the potential impact of the remaining liability for arrears of pay, the Government also opened discussions with the European Commission to explore whether it would be possible to offer assistance with funding without invoking certain EU rules. There has however not been any announcement that such funding will be available.

On 1 November 2017 the Government then took the further step of announcing a new scheme to assist with NMW compliance within the sector.

The Scheme applies to all employers within the social care sector who believe that they might have underpaid the NMW to their sleep-in shift workers. If accepted under the Scheme, employers will have up to a year to self-review their NMW compliance and if a shortfall is declared, will benefit from not having to pay the financial penalty usually imposed on top of wage arrears, not being named and shamed and from potentially having a longer period to pay the arrears than would otherwise be the case. Further details of the Scheme can be found here.

Employers against whom HMRC are already dealing with a NMW complaint relating to sleep-in shifts will be contacted directly with an invitation to join the Scheme within a specified deadline.

Subject to certain conditions, all other affected employers in the social care sector can apply to opt-in to the Scheme on a voluntary basis.

In either event the deadline for joining the Scheme is 31 December 2018.

The Scheme works as follows:

Employers who do not opt-in to the Scheme and who are found to be in breach of their NMW obligations will not receive the benefit of the waiver on financial penalties and naming and shaming offered under the Scheme. 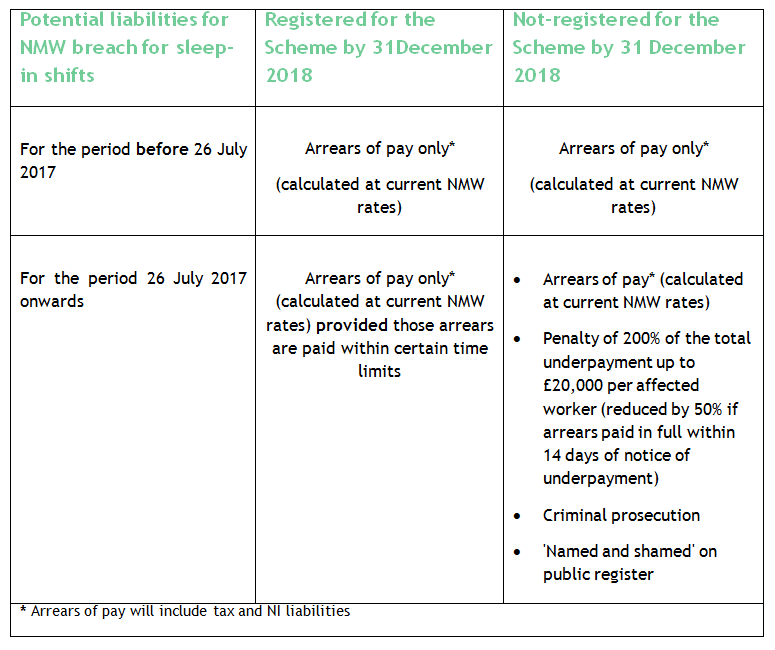 Irrespective of an employer participating in the Scheme, any dismissal of an employee because they have become eligible for the NMW, have taken any action to ensure they receive the NMW or because the employer is being prosecuted for an offence under the NMW legislation, will be automatically unfair irrespective of the employee's length of service. Subjecting an employee to a detriment short of dismissal for the same reasons is also unlawful. In both cases the employer would be liable for compensation in addition to liability for arrears of pay and any penalties levied by HMRC in respect of any NMW shortfall.

To register or not

Any employer already facing a complaint of underpayment of the NMW should in our view apply to register for the Scheme without delay if it has not already been invited to do so. HMRC has told us that it will be informing employers against whom a complaint is or has been made of their ability to opt-into the Scheme and given a 30 day period to do so, failing which the right to opt-in is lost, even though the deadline for other employers does not expire until 31 December 2018.

All remaining employers in the sector who have workers who undertake sleep-in shifts and/or are on call during night time periods should carefully review whether, if the duration of such shifts were to be taken into account in calculating NMW compliance, the average rate paid to their workers is at least equivalent to the NMW for the category of worker concerned. If not, the employer needs to carefully assess whether these sleep-in shifts should be taken into account for NMW purposes in order to determine if registration is appropriate.

NMW compliance and the decision to register will both depend upon a number of factors particular to each employer. If an employer is unsure as to its NMW compliance or whether to register for the Scheme, it should seek professional advice as soon as possible.

We are aware that some employers would prefer to delay their decision to register for the Scheme until after the Court of Appeal's decision in the Mencap case, in order to be clearer as to whether they are likely to have a potential NMW issue. Our initial concern was whether such an employer would then risk losing the opportunity to benefit from the Scheme if in the meantime a complaint about NMW was made against it.

Having contacted HMRC, they have indicated to us that in such circumstances they would, when notifying the employer of a complaint, give that employer a 30 day period to register for the Scheme. Only if that invitation was not taken up within the timeframe would the employer then be barred from registering in the future, and would be subject to all the normal penalties set out in the above table. We would however advise that any employer concerned about this issue contact HMRC directly in order to obtain confirmation that the ability to join the Scheme would not be lost if it delayed its decision to opt-in.

For legal advice as to the risk of you being liable for NMW underpayment in relation to sleep-in shifts please contact Stephen Oxley.